It’s great to see the Government placing an emphasis on community languages being taught with government schools. The Tongan Language School here in Sydney is establishing itself and there are 2 to 3 government primary schools that teach Tongan within their primary curriculum.

Community Language Teacher Mary Greatz talks about her experience within one of these government primary schools.

ANZAC Day (Australian New Zealand Army Corps) has become a day of national remembrance for Australia, New Zealand and Tonga of the sacrifices that generations have endured to keep us safe. While it actually commemorates the Gallipoli landing in Turkey in 1915, it is just one of many campaigns in which Tongans amongst other Pacific Islanders have been a part of since WWI.  This day has come to symbolise the spirit of the ANZAC, that of fatongia (duty), feilalau (sacrifice) and fakakaungame’a (mateship). Like Tonga, Australia and NZ are a small nation compared to forces of the British, French and the US but their bravery, courage and contribution was second to none. Lest we forget!

After learning the Alphabet and correct pronunciation, my class are now working on learning these important question words. Having little or no prior knowledge of the Tongan language, my focus is getting the class to understand these words so I don’t receive blank stares when I ask questions.  Important questions like  Ko hai ho hingoa’? What/Whom is your name? Fēfē hake? How are you? Fē ‘a e peni’? Where is the pen?

Last week, I was honoured to receive my certificate in Community languages teaching at University of Sydney. Words can not express my gratitude and all I can do is to thank the one above for his blessings. When I began this blog over a year ago, never had I imagined I would be a qualified Community Languages Teacher teaching my own class. This course has helped immensely focus my scattered brain of one and a half billion ideas. I look forward to posting more this year. Using my ideas and resources in class and sharing them for you all.

Is ‘plastic’ the new norm?.

Have you been called ‘plastic’ because you speak more English than your native tongue?

Other terms used to address you and your identity for not speaking the language is a pālangi (foreigner) or fie pālangi (want to be a foreigner). Considering there are more Tongans living outside the Kingdom is plastic the new norm? Great article into his own experience which I know many can relate to. Click on the link to check it out. Is ‘plastic’ the new norm?.

Ko e ‘uhinga eni ne u kamata ‘eku si’i feinga he ngalu’ea ma’amoutolu matua moe fanau.
I started my blog with parents, adults and children in mind to help with you all learn or be inspired to learn more. I must be doing something right. Thank you Alando Soakai for your vote. It is encouraging for me to do more. Mālō ‘aupito

Chris Lilley’s comedic portrayal of rebellious troubled teenager Jonah from Tonga is dissappointing to say the least. His mockumentary series really portrays the Aussie Bogan culture. But that mantle piece has already been taken by Kath & Kim and he probably wouldn’t have a following if Jonah were an Aussie, so he finds a niche for his comedy by choosing Tonga and our culture.

Definition of Bogan (noun) derogatory Aussie slag. Refers to someone who is  unsophisticated, uncivilised, lacks manners and culture, crude, no style, un-educated and regarded by society as being of low class.

While many may find it funny, this humour masks some serious issues perpetuating a negative view of Tongans and  upon our youth.

The fact that this program is airing in primetime stations like the BBC in UK and HBO in the US gives me great concern for our youth. I for one am no such Bogan, nor is my family and my kids and Tongans in general. We have a beautiful, strong, vibrant culture of respect for each other reflected in our language and our national dress. Our nation has amongst the highest literacy rates in the world. While life and sanitary conditions in England was harsh in the late 1700s, Captain Cook found our islands civilised with order and houses and well maintained gardens and paths.

One year ago I created this blog as a resource for parents, educators and anyone wanting to learn this beautiful language of ours. My focus was on creating fun experiences for my 4 children, and in that time my children have blossomed. Never did I imagine that one year later I would be putting those personal experiences to the test at my very own Manulua Tongan playgroup.

This is a Tongan saying and is only fitting for my gratitude for this experience, and the wonderful people I have met along the way. “Koe koloa’ ‘a Tonga ko e fakamalo” – Our thanks is the only treasure we have to give in return.

Ko e me’a pe te u lava ke fakamalo  ki he ‘Eiki mafimafi’. I only thing I can do is to give thanks to the Almighty Lord.

What is a Tongan kiss and how is it done? It is also known as the sniff kiss, it is quite easy to do but you must remember several things.

Most of us are quite familiar with the Tongan kiss by the way our parents, grandparents and elderly greeted us. We Tongans use it as a sign of affection. While I may have once thought it an awkward greeting in my teenage years I now embrace it fully and greet my children no other way. Its origins must be ancient going back to our South-East Asian roots, as they also greet this way. It is also similar to the Māori greeting known as Hongi. While they greet using nose to nose, we Tongans use cheek-to-cheek. The significance of the sniff to the Māori people is that it symbolises the breath of life, breathing in the mana of the person you are greeting. Knowing all this, gives you a whole new perspective on the ʻuma faka-Tonga.

Tips in sharing the tradition of Tongan kisses with your children:

My children use to run away every time their grandma said it was milimili kilimi time. Since Iʼve explained to them the following tips they quite like receiving kisses in the Tongan manner. 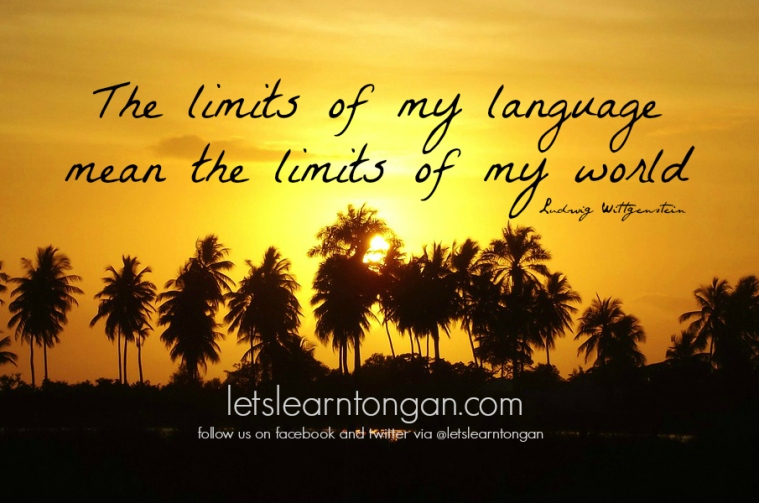 The goal for my blog in 2014 is to make learning the Tongan language easy, fun and shareable for you all in this digital age. Like climbing a coconut tree the view is better from the top but we can only share as much as we know. The limits of my language (ie my understanding of the Tongan language and culture) is the truly the limits of our own world. For parents who are fluent in Tongan please do not limit the view of your children. For those trying to improve, join in the conversation via our socail media page and let us broaden our horizon’s together.